Colombia is full of stunning little towns filled with history, beautiful architecture, and local charm—the Colombian tourism ministry has even created a network of 17 Pueblos Patrimonios(Heritage Towns), bringing them together under one banner. We will introduce you in this serie to these 17 stunning heritage towns.
Today: Jardín

Jardín is a lovely town in the southern Antioquia department, which is famous for its perfectly preserved traditional architecture. The town’s buildings are still almost entirely built in the colonial style of Antioquia, with whitewashed walls and colourfully painted doors and windows. Jardín’s main square is always humming with activity and it makes for a popular weekend trip from Medellín, which is a three-hour drive away.
The name of El Jardín  is very fitting. The first thing that catches your eye here is the main park, adorned with small gardens in which red, pink, and white roses open to greet travelers. This Colombian Heritage Town was founded on May 23, 1863.

El Libertador Park
A fountain and eight small rose gardens, arranged as petals, are located in the center of El Libertador Park, the most important park in El Jardín. Guayacanes and ceibas, among other trees, are also found in the park. The site, which was declared a National Monument in 1985, is the meeting place of the inhabitants of this Colombian Heritage Town. 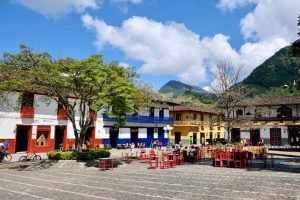 Church of the Immaculate Conception
The most imposing building in El Jardín is the Church of the Immaculate Conception, a Minor basilica that was erected between 1918 and 1942. It is renowned for its half-Gothic style and for having been built with hand carved stones that parishioners brought from a quarry as penance for their sins. Panoramic views of the township and surrounding mountains can be enjoyed from its bell tower. 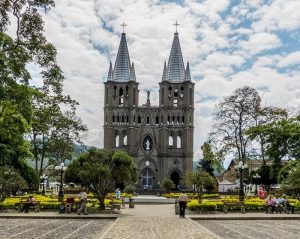 The Cable Car
One of the best views of El Jardín can be seen from the cable car, a shuttle that runs between the urban area and the hill of Cristo Rey, whose slopes are planted with bananas and coffee beans. The ride covers about a quarter mile in a cabin that seats up to eight people.

Clara Rojas Peláez House Museum
El Jardín locals love the Clara Rojas Peláez House Museum in El Libertador Park. It is divided into two parts: one was built as an example of traditional housing and contains a craft shop, tourist office, the historical archives, and a museum of antique work. The other part is the Gabriel Montoya Peláez public library.

Coffee Culture
visitors can learn about coffee culture and the cultivation and production of this symbolic bean in farms near El Jardín. In the neighboring town of Andes, visitors can walk along nature trails shaded by bamboo forests beside the river Tapartó and mountains planted with coffee.